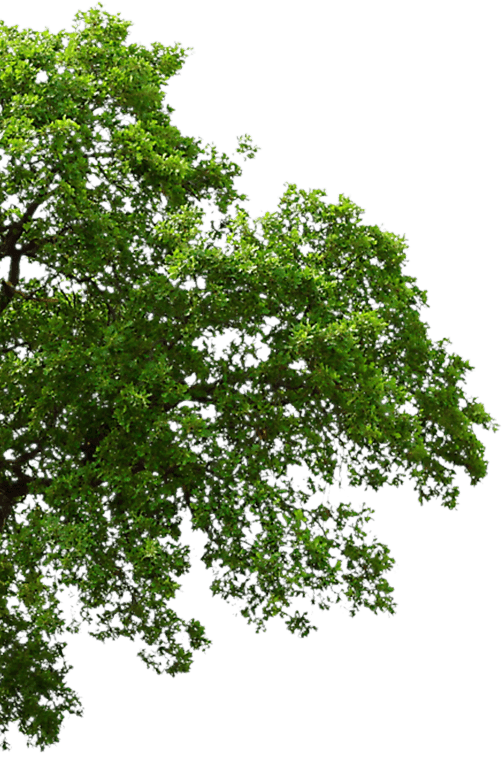 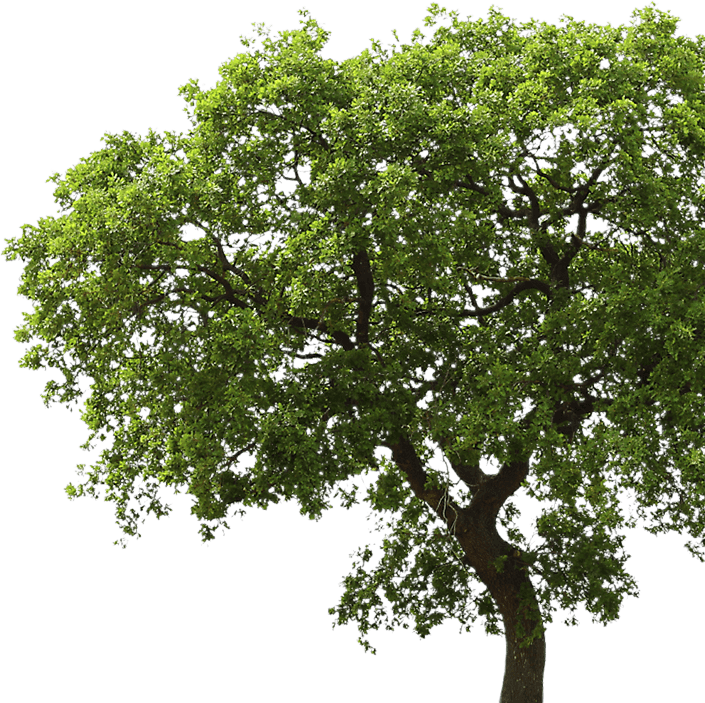 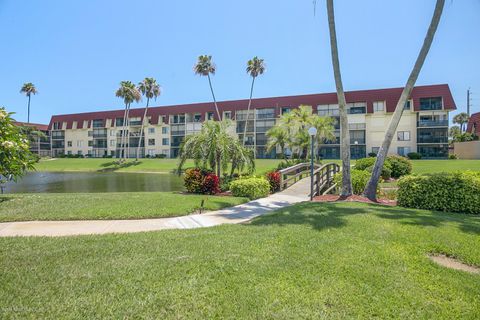 The original kitchen of this Cocoa Beach condominium residence was remodeled in the early 1980’s leaving few elements desirable so that the 2018 remodel brought it to studs and concrete. The fourth story / penthouse  location provided for the opportunity to maximize the original tray multi level ceiling height of 7’6″ to 8’6″ which added for about 20 cubic feet additional storage. The original windows at the east and west ends were adjusted to center on the premium views of both the ocean and the riverfront, but on the east side the window decreased for addition of two large storage pantries. Since the east full width window had been scaled down, lighting levels for the inner kitchen were increased with the provision of both ceiling hung fan/lights and under cabinet fixtures. Finishes of mixed whites for the cabinets and quartz counters also were considered for their impact on light level as well as its illusive qualities making the small space optically larger. Most interesting as a result of ‘form follows function’ theory is that zones created such as typical for kitchen design are also ‘color coded’ zones. The owner had wished to retain the original premium quality dishwasher which is white, but for the remodel she wished for stainless  steel finishes. Hence the new ‘refrigerator’ and ‘oven/microwave’ zones are stainless steel but the wrap around working area is all white, including the original dishwasher. The most significant change and improvement from the original kitchen layout is the repositioning of the refrigerator to the east side and the oven to the west. The result is that the oncoming approach to the kitchen presents a more ‘open plan’ look as there now is a full visual flow inward rather than a ‘block’ by a bulky refrigerator. Overall the design is so successful and notably approved by both owner and neighbors that the design has been requested for copy into other units. 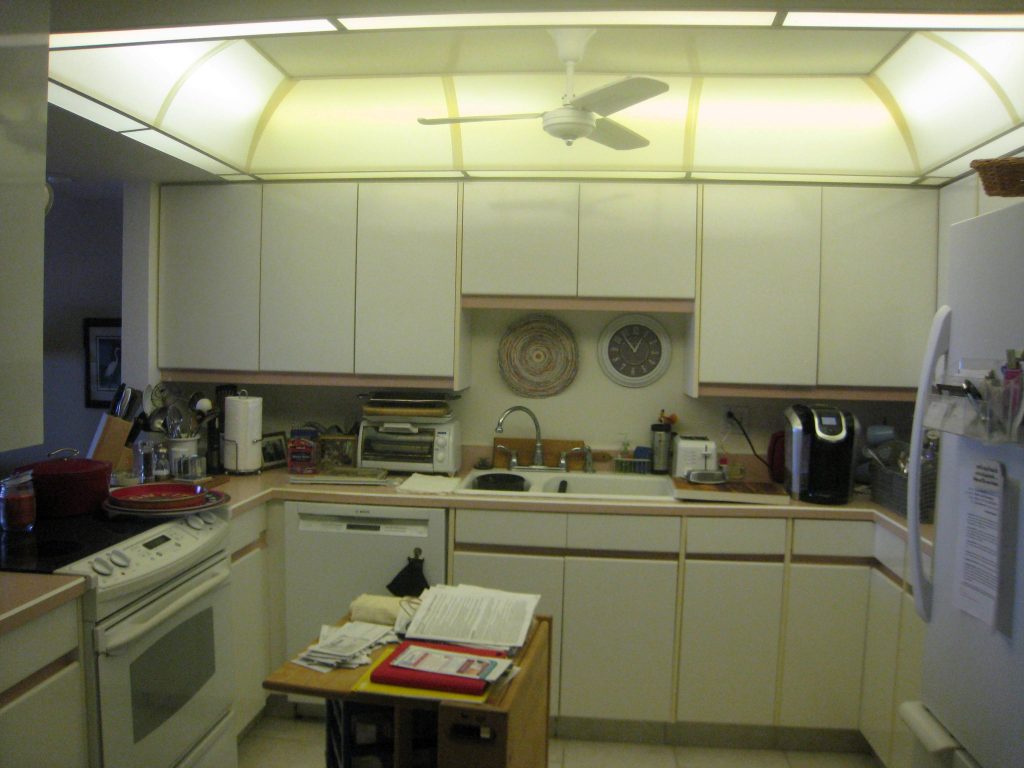 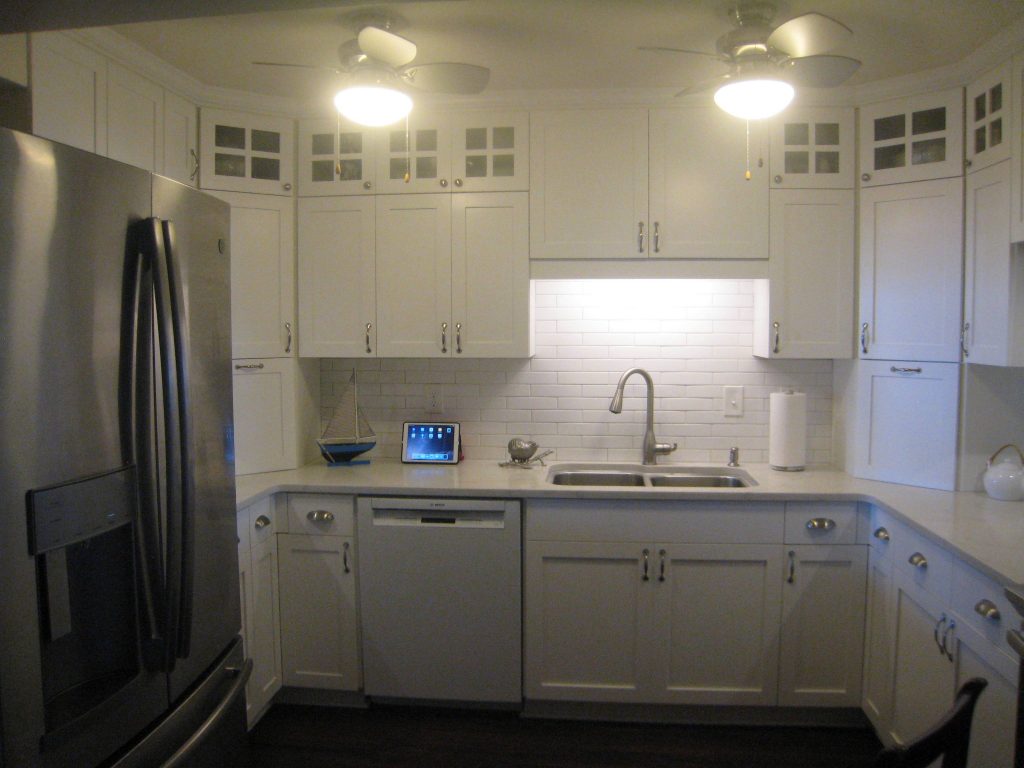 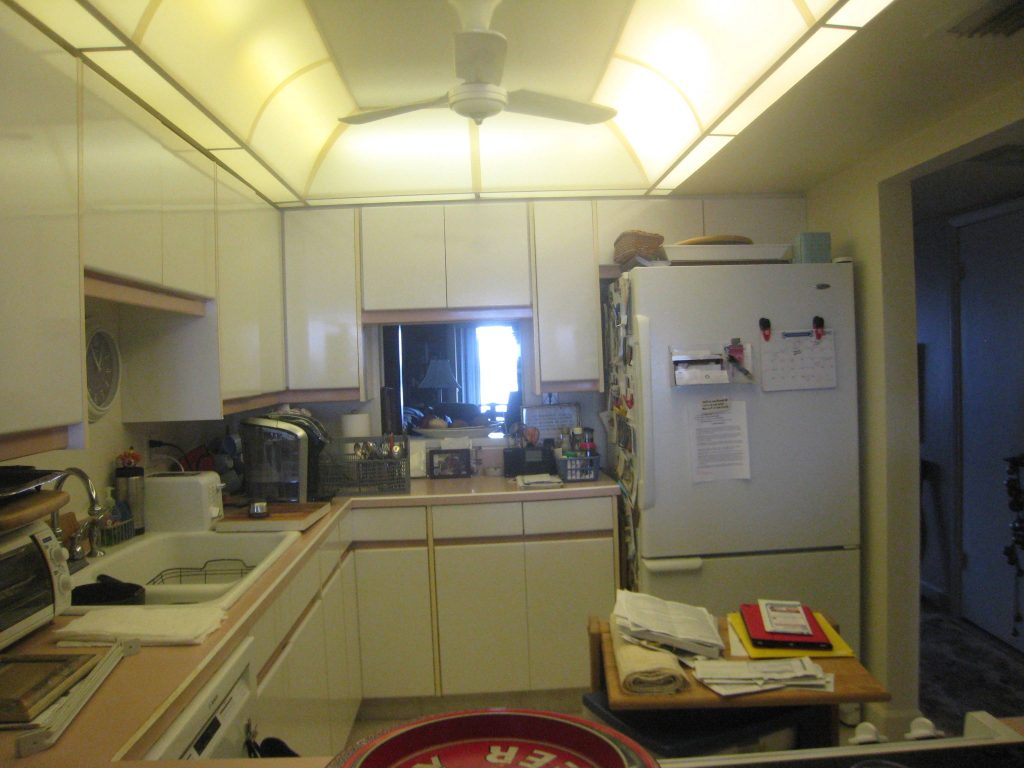 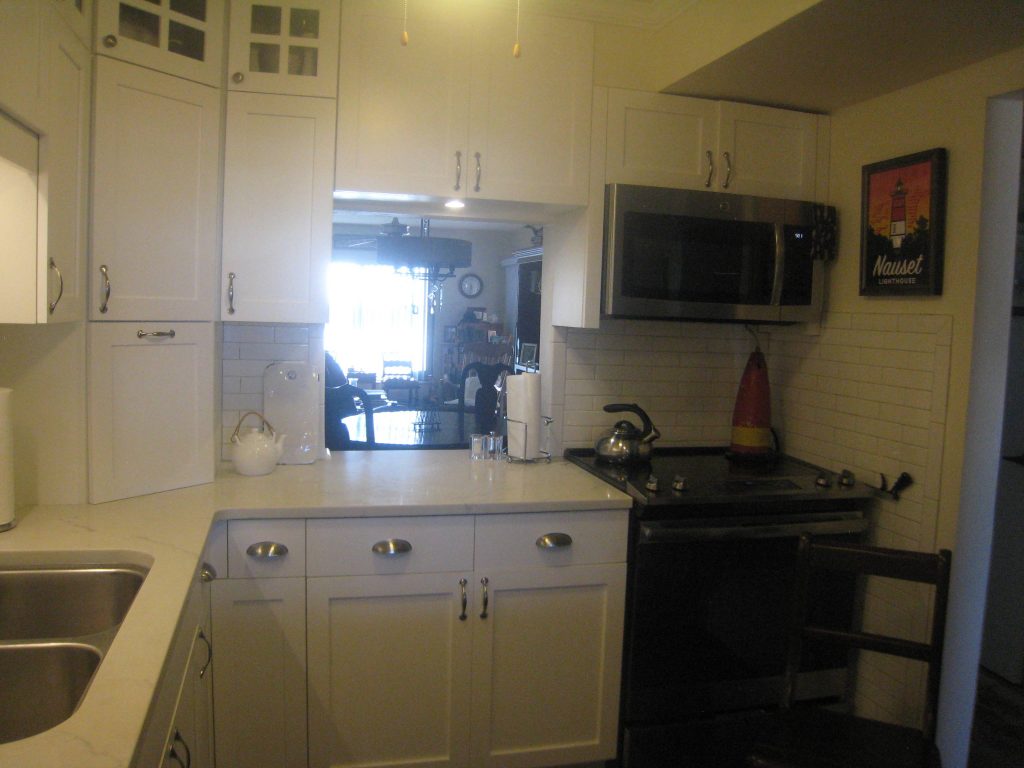 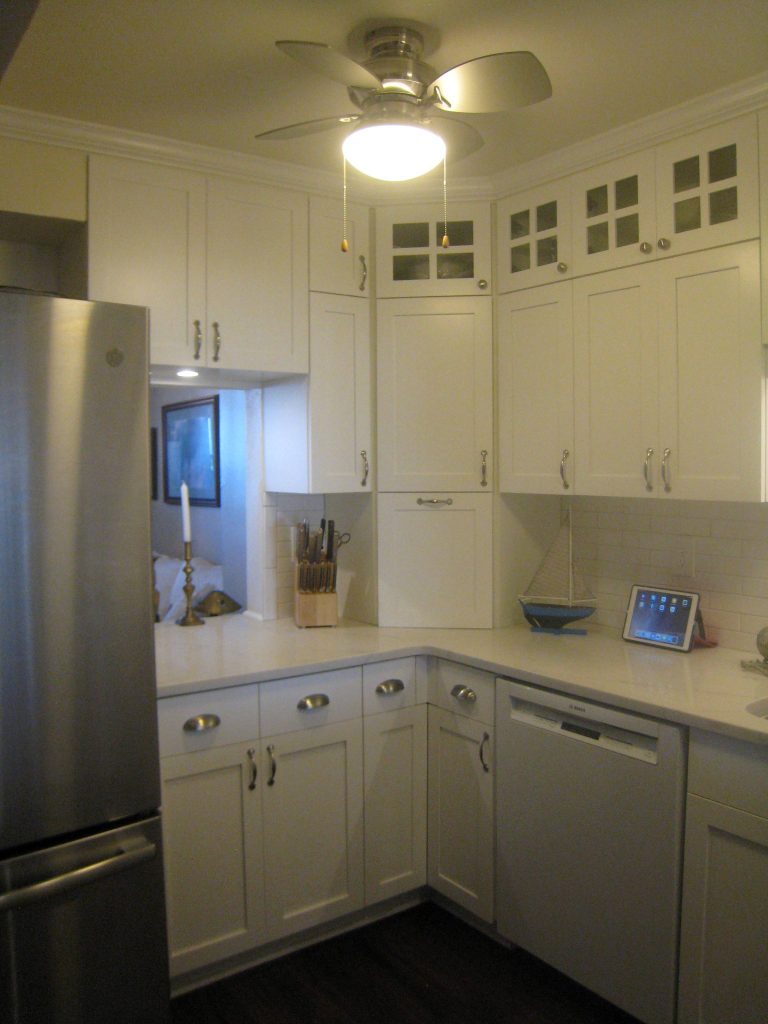 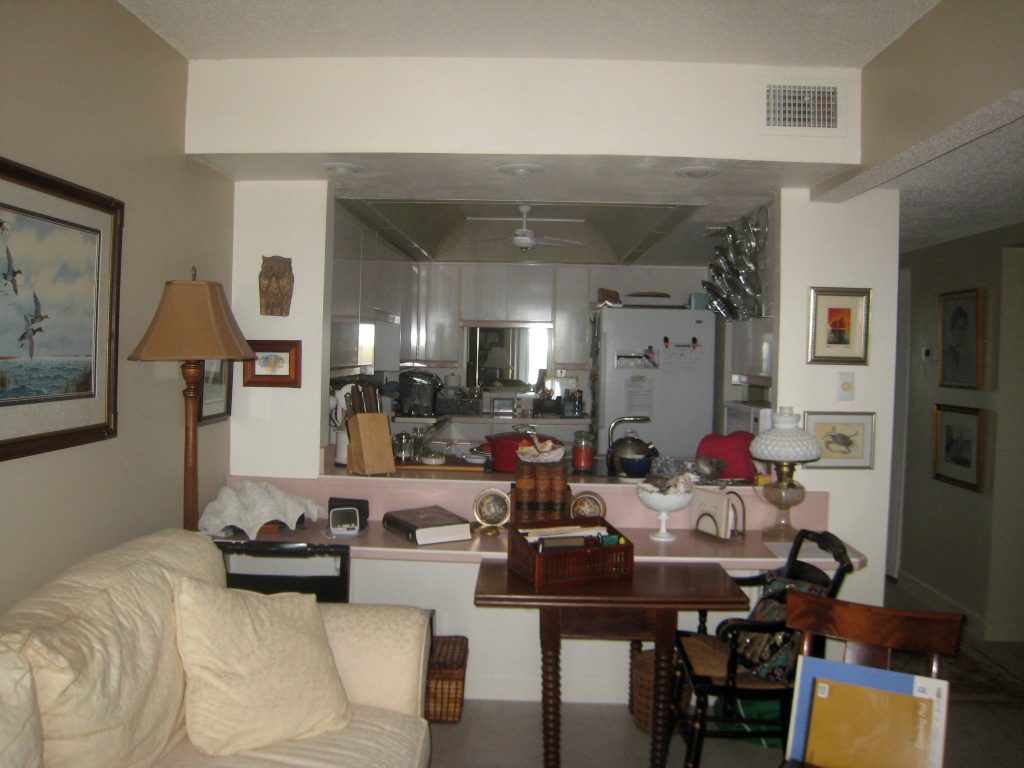 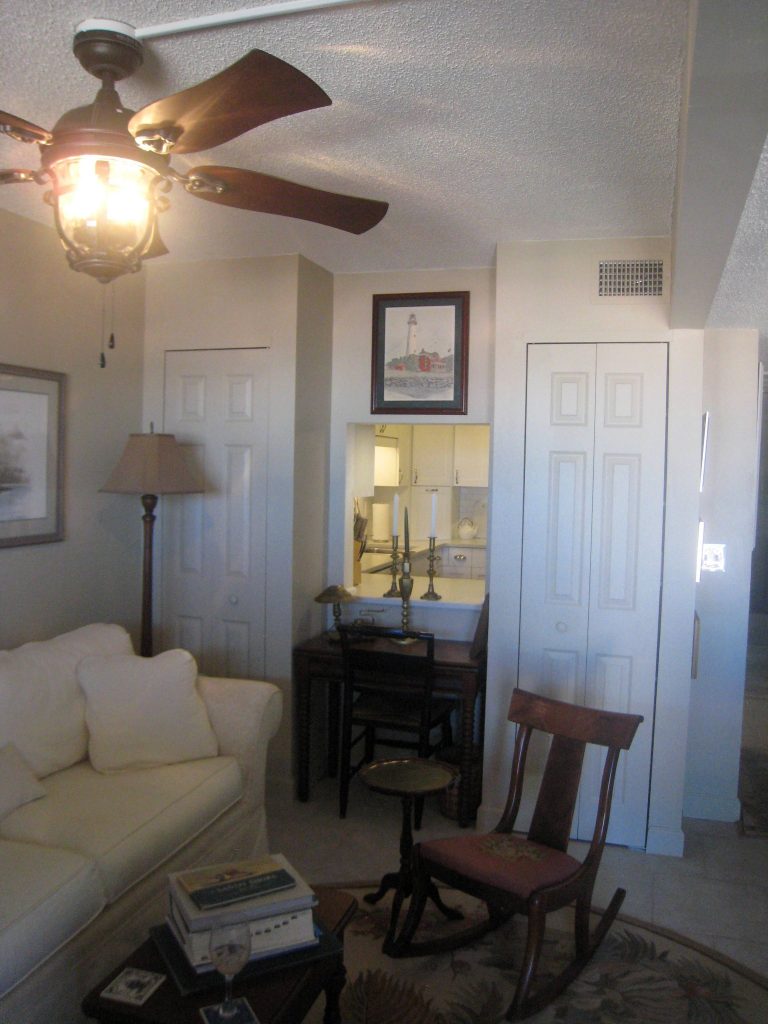